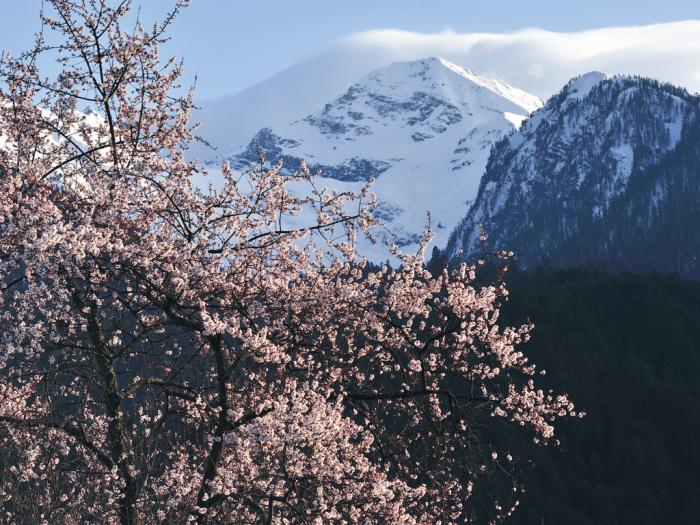 Since the beginning of time there have been changes in the environment, and all beings on the planet have been adapting to them in order to survive. These changes are reflected in the genome and explain why the same tree in different climatic zones can change and produce fruits diverse, for example, in their taste or size.

At the same time, climate change has made many crops less productive, highlighting the urgent need to make them more resilient to climatic stresses. Many studies have identified the genes that allow rice, soybean and other food crops to adapt to their local environments. But few studies have focused on major fruit crops, such as the domesticated peach (Prunus persica), which has an annual global production of 24.5 million tonnes. Also, Prunus L. (Rosaceae) consists of over 200 species that include economically important fruit crops, such as peach (Prunus persica), almond (P. dulcis), plum (P. salicina), apricot (P. armeniaca), Mei (P. mume), and sweet cherry (P. avium).

In a recent paper, a research team led by the Boyce Thompson Institute (BTI) has identified genes that could allow peach trees and their wild relatives to tolerate stressful conditions and adapt to climate change. The research team examined the genomes of 263 wild relatives and local peach varieties from seven regions in China, each one with different environmental particularities: drought, strong UVB exposure, very cold… The team then conducted genome-wide environmental association studies on the samples, and identified more than 2,700 points in the genome that are linked to 51 environmental factors affecting local climates in those regions. For example, peaches from a region with extremely cold winter temperatures had a genetic variation in the histidine phosphotransfer protein AHP5, suggesting that the variant gave the peach tree the ability to withstand the cold. The team confirmed this idea by showing that levels of the protein increased when the plants were subjected to low temperatures. In addition, plants from a very arid region harboured variants in multiple genes in the abscisic acid biosynthesis (ABA) pathway that regulates drought stress responses, and in 12 genes in pathways that regulate starch and sugar metabolism. Further experiments showed that, in response to drought stress, ABA induced higher levels of a sucrose-producing enzyme, thus explaining why the fruit of peach trees in this region have consistently higher sugar content than those from less arid regions. In peach trees from the Tibetan plateau, the team also identified a variant in chalcone synthase 2 associated with tolerance to the intense UV-B radiation of this high-altitude region. The variant increased the production of the purple flavonoid anthocyanin in new plant shoots, protecting them from UV-B damage.

Moreover, a comparative analysis of Prunus genomes indicated a remarkable expansion of the SINE retrotransposons occurred in the genomes of Tibetan species. Authors identified 62 Tibetan peach-specific SINEs that colocalized with metabolites differentially accumualted in Tibetan relative to cultivated peach. All these genomic and metabolic data for Prunus populations native to the Himalayan region indicate that the expansion of SINE retrotransposons helped Tibetan Prunus species adapt to the harsh environment of the Himalayan plateau by promoting the accumulation of beneficial metabolites.

Finally, the genetic information provided by these studies could help to breed Prunus trees that grow in very different and harsh environments, extending the geographical range of peach crops to new regions. This would increase the cultivation of this tree, improving not only its production, but also increasing the possibilities of cultivation in other areas that were not favourable until now, strengthening the economy and local markets.