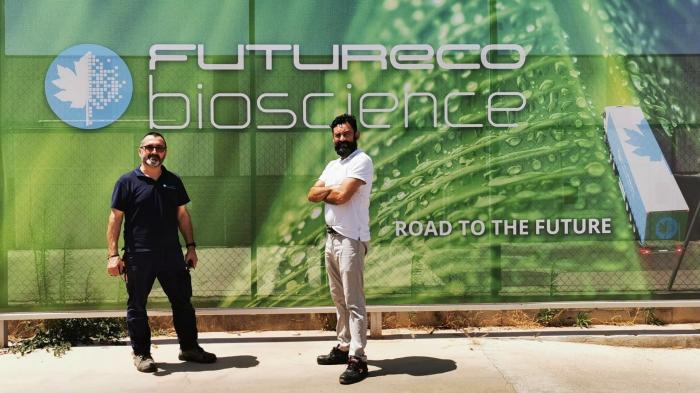 Futureco Bioscience, as a responsible company and signatory of the United Nations Global Compact, constantly strives to improve its performance and reduce the environmental impact resulting from its activity.  According to the report of the Ministry for Ecological Transition and Demographic Challenge released this July 07, the company has emitted in the three-year period 2018-2021 241.95 tons of CO2, 31.8% less compared to the three-year period 2017-2020. This means saving around 40 tons of CO2 per year, savings equivalent to the emissions that would generate 450 trips Barcelona – Madrid with a medium-sized gasoline car.

Several factors have contributed to the reduction of emissions, which reaches objectives 1 (Calculate) and 2 (Reduce) of the same Register, but undoubtedly the most relevant has been working with 100% renewable energy suppliers. Today Futureco Bioscience is powered mostly by renewable energy from natural sources, such as solar, wind, hydro, biomass, biogas or geothermal, which happily are almost inexhaustible.

Rafael Juncosa, president and CEO of Futureco Bioscience comments: “If something characterizes Futureco Bioscience is its commitment to the environment and sustainability.  A philosophy that our company applies both to its internal processes and to the products it offers to its customers. In line with these principles, we are pleased to have managed to reduce our carbon dioxide emissions thanks to the use of 100 percent renewable energy. It is important to remember that renewable energies have additional benefits: they make the energy supply more diverse, encourage the development of new technologies and help create new jobs.”

Carbon dioxide is indispensable for life on earth as we know it. However, although it is naturally present on the planet and so useful to us, it is a gas that retains heat and, together with others, such as methane, contributes to forming a layer in the atmosphere that increases the Earth’s surface temperature, causing climate change with all its consequences. Among them, it is estimated that for every degree increase in temperature, cereal production is reduced by approximately 5%. There has been a significant reduction in the production of corn, wheat and other major crops of 40 megatons per year worldwide between 1981 and 2002 due to the warmer climate.

“Betting on renewable energies is just one more step in the path towards sustainability that guides the company” comments Juan Pablo Rodriguez, Head of the Integrated Management System at FuturecoBioscience. “We have minimized the use of fossil fuels to generate energy, and we expect to continue reducing our environmental footprint in the coming years, and we are also evaluating compensation actions for residual emissions.